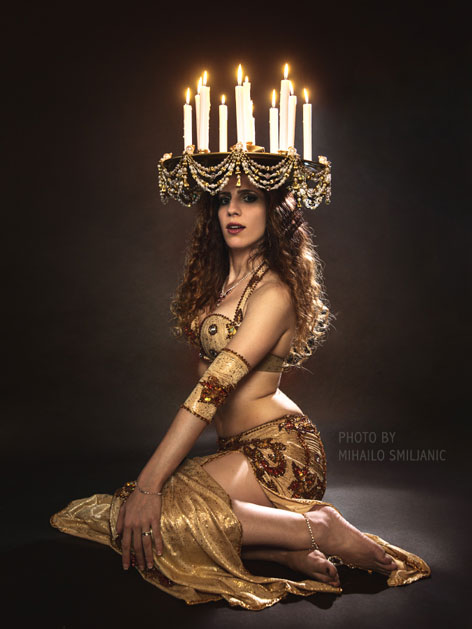 Salit Cohen-Cheng is a professional Middle Eastern dancer, instructor and choreographer based in New York City. Her passion for belly dance began in 2005 at the Arabesque studio in Jerusalem, Israel, and since then she has continued her studies of dance, art, movement, music, and Arabic culture. Having danced ballet as a kid, it wasn’t until her mother started taking belly dance classes that she decided to study it fully. In an interview with Bustle, she notes that once she found belly dance, she “immediately felt at home when I started dancing this style, and after my first performance as a belly dancer (with a students’ group) I knew I had found my place.” In order to further her skills, she has taken various many classes and workshops by world-renowned masters such as Yousry Sharif, Orit Maftsir, Tito, Nour, Jehan Kamal, Randa Kamel, Raqia Hassan, to name a few.

Salit plays the darbouka (Arabic drum) and is a trained opera singer. Salit has been featured in various off-Broadway theatrical shows like 700 Wives, The Joining, and Blood on the Veil. She is a member of BellyTrance Group and has toured with other troupes including Isis Jerusalem, Dance Sol Company, and Arabesque. A professional graphic designer, Salit hold two certificates in Middle Eastern Dance instruction; by the Wingate Institute of Sports, Israel, and by Bellyqueen School, New York. Specializing in Egyptian style with an emphasis on improvisational work and drawing influence from flamenco, samba and modern, she teaches regular group and private belly dance classes in New York, as well as classes and workshops internationally. To Salit, “Belly dance is unique in its wavy, slinky movements, that go naturally with and not against the body. It is also the ability to express so much with little or no movement at all that makes this dance unique.”

What is Egyptian Belly Dance?

Belly Dance, which is also known as Raqs Sharqi (“Eastern Dance”) in Arabic or Raqs Baladi (“Folk Dance”) in Egyptian Arabic, originates from different folkloric dances around the Middle East, North Africa, Mediterannean, and several countries along the Silk Road. A heavily torso and hip-driven dance, belly dance focuses on isolations of the torso muscles. These dances trace back thousands of years and they evolved into the modern belly dance style that is performed today. In the 1940s, an Egyptian choreographer named Mahmoud Reda took different folk dances from various tribes and people and adapted them to the stage. Since Hollywood movies and Broadway show have influenced belly dance as well, the movements, staging, and costumes became more theatrical. In Egypt, dancers wear a bedlah or a dress with mesh-filled cutouts.